In bigger-is-better Texas, Eagle Stadium, which rivals Staples Center in capacity with 18,000 seats, gives the suburban Dallas high school serious bragging rights. But in the battle of one-upmanship among Texas high schools, a challenger is rising close to home.

The school district just up the street in McKinney plans to break ground within a month on a nearly $70-million stadium — the newest competitor in a spend-off critics call a stadium arms race.

“Oh, it’s a rivalry,” said Adam Blanchet, a junior at McKinney North, one of the three high schools in the McKinney Independent School District that will use the new stadium. “I have pride knowing my district is going to have the most expensive stadium in the country.”

In McKinney, a booming Dallas suburb of about 162,000 residents where the the median household income is $83,000, many seem to share a similar stance on the stadium — sure it’s expensive, but the students deserve it. But one group has fiercely opposed the new project: Grassroots McKinney, an offshoot of the local tea party.

On a recent afternoon, group member Mike Giles stood in the shadow of Ron Poe Stadium, a 7,000-seat venue built in 1962, where McKinney’s high schools currently play their football games.

“In many places, that would be a really nice stadium,” Giles said, rolling his eyes. “But, no, we’ve got to one-up Allen. That’s what started this whole mess.”

Actually, the trend appears to have taken root in 2001 when Carroll High School in Southlake built a stadium holding about 12,000 for $15.3 million. A handful of high school stadiums seating about 10,000 or more have since sprung up, mostly around Dallas, though down south in Katy, a suburb of Houston, a $62.5-million stadium is under construction.

In Frisco, which neighbors Allen and McKinney, the district will pay $30 million over several years to use the Dallas Cowboys’ new 12,000-seat practice field for high school football and soccer games, as well as graduation ceremonies.

The McKinney stadium’s price tag, which includes an adjacent 500-seat event center, has drawn national attention, including a jab from Jimmy Fallon on his talk show.

“I read that a town in Texas just agreed to build a $62-million stadium for its high school football team,” Fallon said, “while the school’s soccer team just got permission to buy a ball.”

District officials and stadium supporters are quick to point out that the stadium will have multiple uses and was part of a five-year, $220-million bond package that upgraded or added new facilities across the district. The stadium, though, was the biggest part of the plan voters approved in May by 62%.

In McKinney, school taxes for property owners amount to $1.63 p 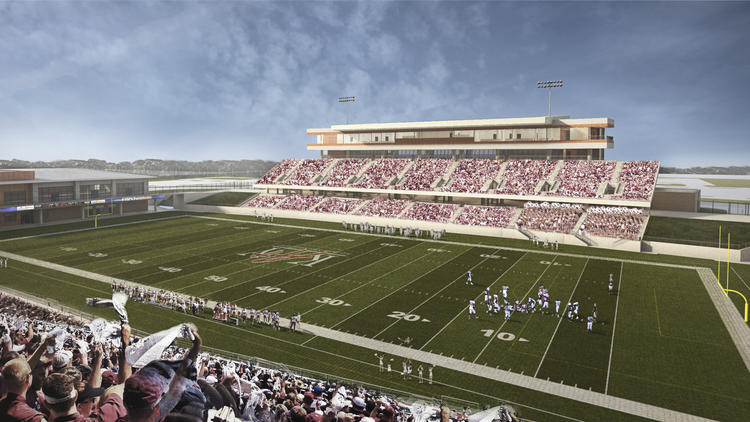 er $100 of assessed valuation. The tax rate had been higher in the recent past, but it fell 5 cents this year, partly because the district had dropped some old debt. Because of the 5-cent decrease, district officials repeatedly note, property owners will see their taxes go down, even as the new stadium goes up.

The original proposal called for a stadium costing about $63 million, but the price rose due mainly to skyrocketing concrete prices. To cover the increased cost, the district will use leftover money from a previous bond, district spokesman Cody Cunningham said.

The stadium — which will be outfitted with a 55-foot-wide, high-definition video screen and an artificial-grass field — is being built by the same construction company that did the Dallas Cowboys’ AT&T Stadium and Globe Life Park, where the Texas Rangers play. With seating for 12,000, it could accommodate half the enrollment of the entire 24,500-student, pre-K-to-12 district.

Cunningham brushed off the arms race theory, but admits that there’s hearty competition among the affluent school districts in the region, which benefit from spiking home prices. People pick which district to build their home in, he said, and a spiffy stadium is just one “part of the package.”

“It’s like our mayor will say,” Cunningham said, “‘You don’t need dog parks, but they’re an amenity that people enjoy and appreciate and are willing to pay for.”

Cunningham said it’s a misconception to equate the stadium’s construction with academic sacrifices, noting the district has a 96% graduation rate. The average SAT score in the district, according to Texas education records, is 1576 — more than 150 points above the state average.

When it comes to education and athletics, Cunningham said, “we believe we can do both.”

Although Texas has an equalization law requiring districts in property-wealthy areas to share money with poorer districts — often called the “Robin Hood plan” —  money from bond elections doesn’t have to be shared.

Ask students at Allen High, which boasts an even higher graduation rate and SAT average, about McKinney’s new stadium and prepare for smirks and smack talk.

Hollis Marcinek, a junior, dismissed it as an obvious attempt at “copying us.” A sophomore called McKinney “wannabes,” and his friend had a simple take on the upcoming stadium: “It’s gonna suck.”

For now, McKinney’s high schools continue to play at Ron Poe Stadium. There, on a recent evening, crowds gathered for McKinney North’s homecoming.

Before the game, a group of high school girls clustered in a circle, painting dots of navy and orange — their school colors — on each other’s cheeks. Junior Elizabeth Padilla bounced up and down on her toes in anticipation of the game, explaining that she’s “super, super, super into football.”

Padilla couldn’t help but give a begrudging nod to Eagle Stadium. But then a friend reminded the group that Allen High’s venue, which opened in 2012, had already been forced to shut down for an entire season after cracks appeared in the concrete concourse. The girls giggled, recalling the misfortune. But then one got serious.

“What if that happens to ours?” one girl asked.

“No,” Padilla said, “ours is more expensive.”

As players barreled down an inflatable tunnel and out the mouth of a bulldog, the school’s mascot, the bleachers in the student section vibrated from all the jumping. Nearby, the team’s 15 coaches — not uncommon, they say, by north Texas standards — barked last-minute tips as the players ran onto the field.

The opponent scored a quick touchdown after the kickoff and McKinney North’s head coach, Mike Fecci, ripped off his headset and slammed it against his thigh.

For Fecci, football is a lens through which to view the world — a way to teach boys lessons of consistency and perseverance that will help them as fathers and husbands.

By the end of the fourth quarter, McKinney North was down 35-38, and planning to attempt a 47-yard field goal.

The kicker, a wiry blond nominated to the homecoming court, wound back his leg and swung. The ball soared through the air and some started to cheer. But bad news boomed through the loudspeakers.

A boy in the student section let his “Go Dawgs!” sign flutter to the ground, and a mother who’d been teaching her young daughter about the game swore.

In the new stadium, she said, a loss like that will sting just as much.