Look who’s in favor of ‘Medicare for all’: Trump voters and S 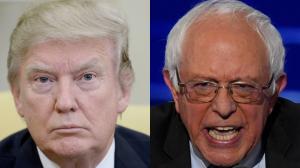 Shared by
Save Main Street

But out of the shambles of that failed effort may come a reform that actually does provide affordable universal health care: a national single-payer system, aka Medicare for all.

Both ends of the political spectrum — the far left under Bernie Sanders and, improbable as it may seem, the far right under the likes of Richard Spencer — are pushing single-payer not only as the solution to guaranteeing humane health care but as a self-regulating system to rein in spiraling costs.

Unfortunately, it is the middle of the political spectrum that controls Congress, and they remain in the pocket of drug companies and health insurers that profit so richly from the current, inefficient hodgepodge of coverage.

Shared by
Save Main Street
Published April 30, 2017 by Zach Haller

The lawsuit, filed on June 28, 2016, seeks damages on behalf of plaintiffs comprising various classes of American citizens who made financial contributions to the DNC for then-candidate and Vermont Senator Bernie Sanders under the presumption the Democratic Party’s nominating process would be fair to all candidates running for the Party’s presidential nomination.

Article 5, Section 4 of the DNC’s official Charter states as follows:

In the conduct and management of the affairs and procedures of the Democratic National Committee, particularly as they apply to the preparation and conduct of the Presidential nomination process, the Chairperson [Debbie Wasserman-Schultz] shall exercise impartiality and evenhandedness as between the Presidential candidates and campaigns. The Chairperson shall be responsible for ensuring that the national officers and staff of the Democratic National Committee maintain impartiality and evenhandedness during the Democratic Party Presidential nominating process.

The lawsuit was filed by Attorneys Jared Beck and Elizabeth Lee Beck approximately one month prior to the Democratic National Convention in which Former Secretary of State Hillary Clinton claimed the Democratic Party’s nomination for President following an initial leak by the hacker known as Guccifer 2.0 that exposed coordinated, behind-closed-doors efforts by Clinton, Wasserman-Schultz, and individuals within the political and media establishment to ensure Clinton was the democratic nominee in direct violation of the DNC’s impartiality clause.

The tragic Saturday night shooting of a 15-year-old boy by a Balch Springs police officer is, without question, disturbing.
In this case, like in virtually all officer-involved shootings, a conflicting pair of narratives quickly emerged: one that sets out to explain why an officer fired his weapon at a car full of teenagers hurriedly leaving a party, and one that condemns the haphazard use of deadly force.

The fact that the victim, Jordan Edwards, is black already has intensified public attention, given the movement nationwide to give more scrutiny to the killings of young black men by police; people are calling for not just answers, but for the officer’s dismissal.
Yet, as bad as this looks to many on the outside, and as emotionally wrenching as it may be to mourn the loss of a young life, we must remain patient and calm in our resolve for truth and justice.
No one can make light of the risks facing first responders who hear “Shots fired!” and run into the danger; the sad story Monday of a Dallas Fire-Rescue medic who was shot while responding to a call for help is an all-too-real reminder.
That’s all the more reason why the public needs a full and transparent accounting of what transpired in Balch Springs. That requires giving the multiple agencies investigating the shooting — including the Dallas County Sheriff’s Department, the Dallas County district attorney’s office and the Balch Springs Police Department — the time they need to get to the bottom of it.
The early reports are encouraging: The police chief of Balch Springs, a town of just under 25,000 people about 16 miles east of Dallas, immediately requested outside help from Dallas County, whose relative independence and additional resources should lend credibility to any findings.
So far, the basic outline is this: Balch Springs Police Chief Jonathan Haber said officers heard gunshots while responding to a call of drunken teens about 11 p.m. Saturday in the 12300 block of Baron Drive. Haber said a car was backing down the road toward officers “in an aggressive manner.” An officer fired at the vehicle and struck Jordan, apparently through a passenger-side window.
The unidentified officer has been placed on routine administrative leave. No officers were injured.
Were there additional factors that made officers feel at risk? Were there extenuating circumstances to justify shooting into a moving car, despite the fact that many police experts and departments no longer believe that is good policy? What were these officers trained to do in a situation like this?
We wait with so many others in North Texas to hear these answers, to help us make sense of why Jordan lost his life.
Our hearts go out to the family of Jordan Edwards, whom friends and family described as a cheerful, well-liked football player and honor-roll freshman at Mesquite High School.
His death, sadly, bears the unfortunate markings of a preventable tragedy.
From the Dallas County DA
Dallas County District Attorney Faith Johnson released this statement on Monday:
“The Dallas County District Attorney’s Office’s Public Integrity Unit includes a specialized group of experienced attorneys and investigators. The Civil Rights Team responds to all officer-involved shootings in Dallas County to conduct an impartial and independent investigation.
“As such, the Dallas County District Attorney’s Office is investigating the death of Jordan Edwards. We offer our sincere condolences to Jordan’s family and will continue to keep them in our thoughts and prayers as we move forward expeditiously, with a commitment to justice and transparency. “