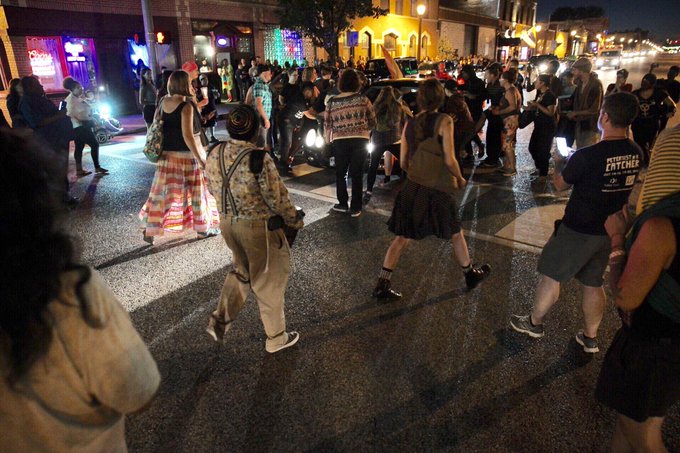 a transgender woman killed by police in

north St. Louis Wednesday, turned ugly tonight when an impatient driver refused to stop for protesters, hitting three of them.

St. Louis Post-Dispatch photographer David Carson captured the moment when the car drove through the assembly on Manchester Avenue in the Grove. 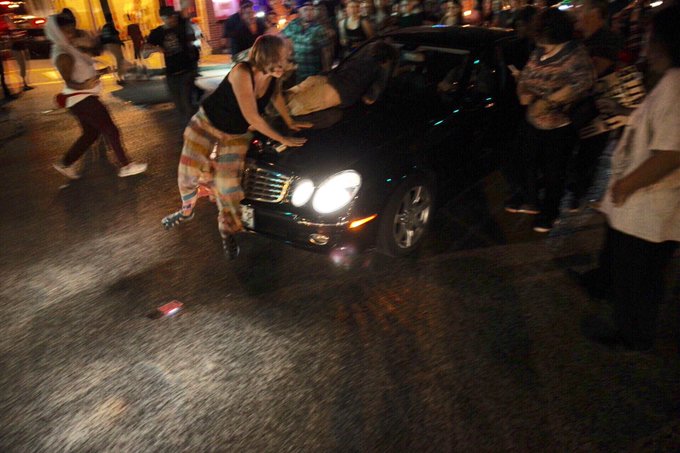 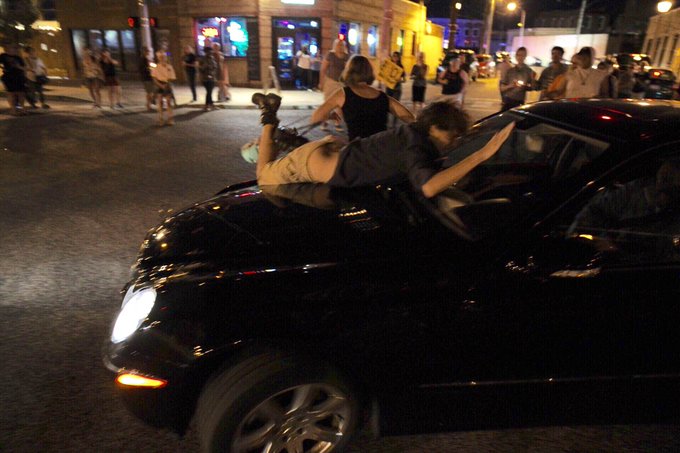 Pix from car that drove through protesters, car stopped was surrounded, then drove through, one person ended up on hood, only minor injuries

Schron Jackson, a police spokeswoman, said the driver was taken into custody on a charge of felony fleeing.

Tonight, a group of protesters marched from the Transgender Memorial to the intersection of Manchester and Sarah were they blocked traffic in all directions. A vehicle approached, stopped, honked its horn and attempted to drive around the protesters.

Police attempted to stop driver of vehicle who initially refused to stop. He stopped about a block away from the incident and was taken into custody for felony fleeing. The incident was captured on video. The investigation is ongoing.

But protester Keith Rose took issue with that assertion. In a public post on Facebook, he wrote,

The police are saying that he drove through the crowd because people were surrounding his car and striking it. That is not true.

He drove toward a group of about 4 protesters and stopped just before he was about to hit them. He had both hands off of the wheel and was giving the middle finger. More protesters got in front of the car to stand by the others. Some stood off to the side. I did not see a single person behind his car. He then began to drive forward, slowly hitting people.

It was only once he was already hitting people and increasing his speed that people began to hit his car. He continued to drive faster, deeper into the crowd, turning to his left as he went. By the time he left the intersection he was going pretty fast. He whipped around another corner and was chased by the police.

He was caught almost a mile away near Rally’s. (The police statement said “about a block from the intersection”.) The SLMPD is going out of its way to protect this man who tried to run over people just a couple weeks after the Charlottesville attack. This kind of immunity from consequences only emboldens the people who want to harm protesters.

Shaken attendees took to social media last night. Some shared the license plate of a black Mercedes sedan that they said was involved.

A car just ran through protesters in the Grove. #KiwiHerring#stl

Physically, we are okay.

We had a vigil for #KiwiHerring and marched to the grove. Where a white man tried to run us over in his Mercedes. St. Louis. Amerikkka.

If we are calling out domestic terrorism, THIS IS IT. #KiwiHerringhttps://t.co/PrO7Qe7xeD 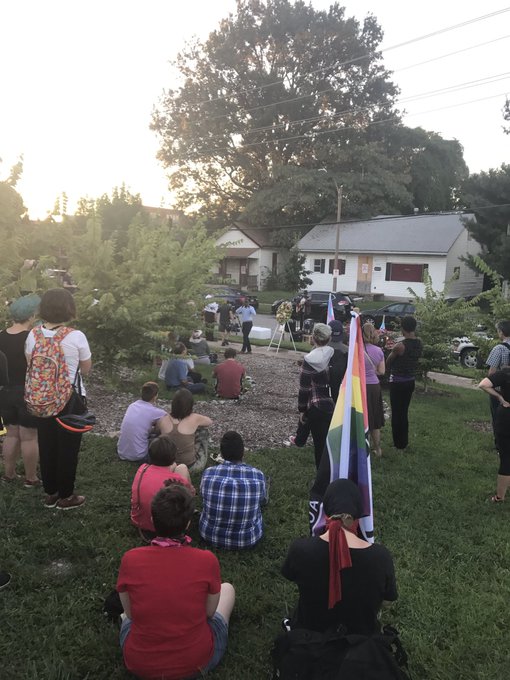 esday in north St. Louis. They say they received reports of a domestic dispute and arrived to find a 30-year-old man badly cut around the face, arms and torso. Police allege that Herring, also 30, was armed with a large kitchen knife and swung at officers — and that they then shot her.

say she was also involved in the attack on the 30-year-old male victim. 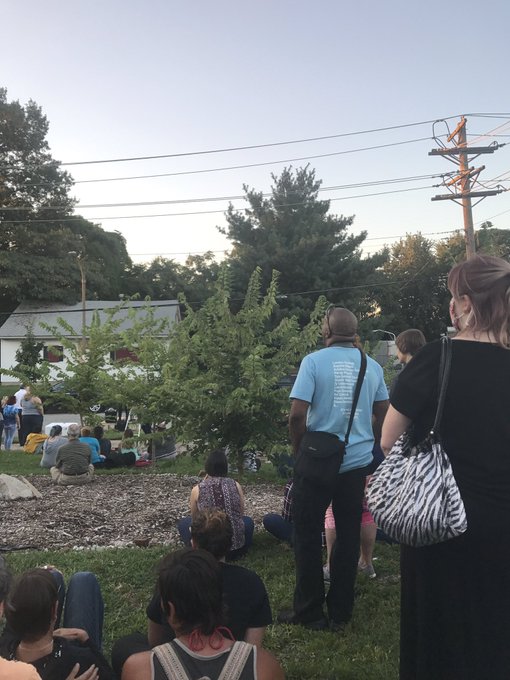 But the police response drew ire because they initially described the deceased as a 30-year-old man. Herring, friends and family say, identified as a woman.

The city’s LGBTQ community paid tribute yesterday, even as others criticized the language in the initial police reports 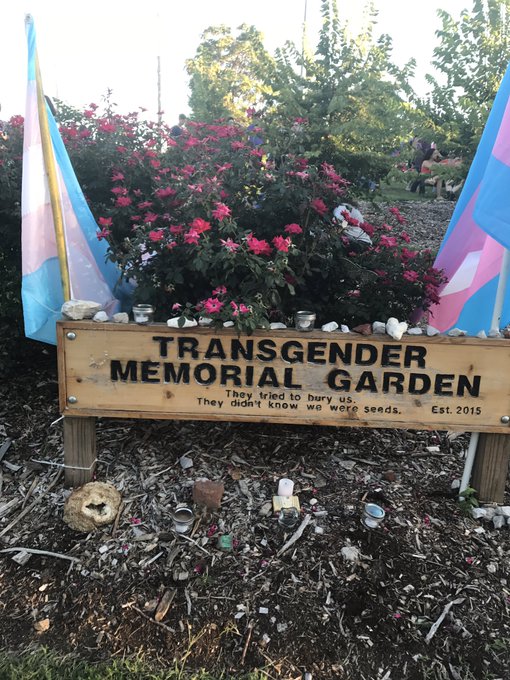 Mourning the life of #KiwiHerring at the Transgender Memorial Garden in St. Louis. #BlackTransLivesMatter#SayHerName 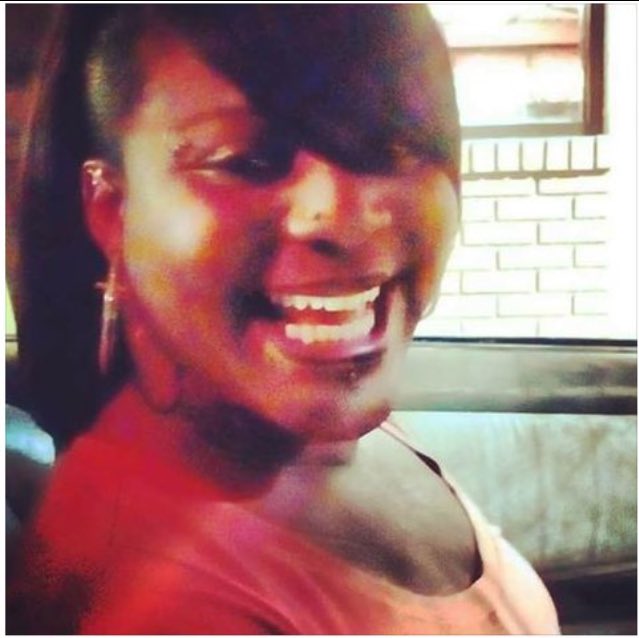 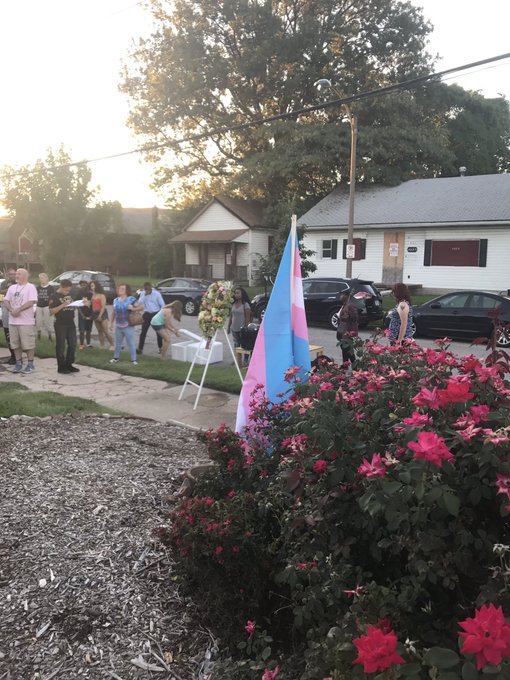 The media continues to misgender #KiwiHerring. The police killed a woman today. A black woman. #SayHerName

#KiwiHerring sent her kids to school this morning and was killed before they came home. #SayHerName#BlackTransLivesMatter

The Metro Trans Umbrella Group has been raising money for Herring’s family online. So far, more than $5,000 has been donated.