Gender Reveal Fire, Workers Rights and homophobic abuse of a child
Internal Homophobic "Buck Breaking" Within Black Community Carried Out Against 12 Year Old Victim.
Kevin Samuels Tells His Audience A Black Woman Deserves Violence For Not Smiling On Demand
We're really FIRED UP about this update from the Gender Reveal Sector of reactionary transphobes.
Hundreds of UMWA miners remain on the picket line at the Warrior Met Coal mine.
#BeckyLivesMatter #WhiteOnWhiteCrime Post Racial\ Uncategorized White criminal

Milo Yiggieyappermouth threw a digital fit about all this gosh darn money he wasted because fiscally responsible right winger. And we’re gonna make fun of it.

Luther, OK (The Oklahoman) — A teenage girl who was stabbed at Luther High School last week told investigators the boy accused of stabbing her had repeatedly tried to start a romantic relationship with her.

About 8:15 a.m. on Aug. 16, students were gathered for an assembly in the school’s auditorium when a 14-year-old boy stood up and repeatedly stabbed a 14-year-old girl. The boy and the victim were friends, but Luther police Chief David Randall said the boy wanted a relationship.

“There was one point where he approached her in reference… to try to have some type of relationship, to which she said she wasn’t interested in it,” Randall said the victim told him during an interview earlier this week.

Teretha Wilson and McArthur Bryant raise their 10-year-old son Tamarion to call their elders “ma’am” and “sir,” but that politeness got the fifth grader in trouble from a teacher at his preparatory school.

The North Carolina parents told ABC-13 that they had Tamarion moved to a different classroom at North East Carolina Preparatory School in Tarboro after his teacher punished him for calling her “ma’am.”

Tamarion had returned from school on Tuesday with a punishment he had to have signed by his parents. He went on to explain that he had continued to repeatedly call his teacher “ma’am” despite her requests not to, and was told to write the word “ma’am” written on a piece of paper four times per line on both sides as a penalty.

“He had a look on his face of disappointment, shame,” Bryant told ABC-13. “At the end of the day as a father, to feel kind of responsible for that…knowing that I have been raising him and doing the best that I can, it’s not acceptable.”

Wilson went on to explain that Tamarion had recently been in the hospital for seizure-related activity, and had been suffering from memory loss and hallucinations.

Adding to their anger was how the teacher allegedly told Tamarion during the encounter that “if she had something, she would have thrown it at him” — which the parents said the teacher admitted when they met with her and the principal the next day.

“It wasn’t right,” Wilson told to ABC-13. “It wasn’t professional. As a teacher, it wasn’t appropriate.”

Reps for North East Carolina Preparatory School did not immediately respond to PEOPLE’s request for comment, but told ABC-13 in a statement, “This is a personnel matter which has been handled appropriately by the K-7 principal.” 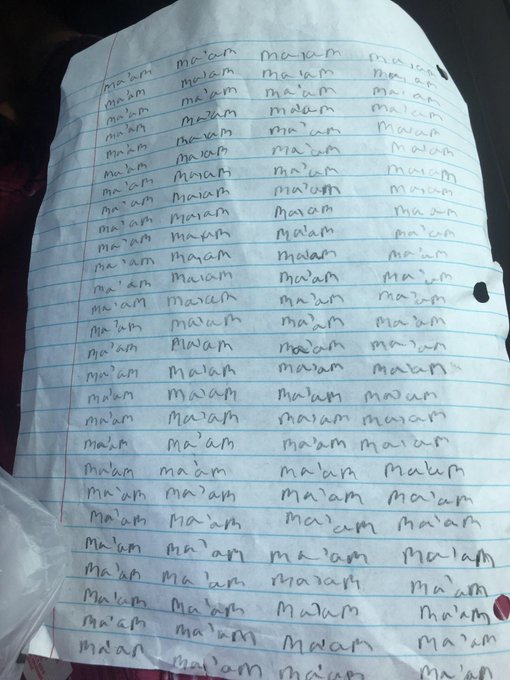 Coming up at 4:30 and 6 on @ABC11_WTVD: Parents of a Tarboro 5th grader are upset after their son got in trouble for calling a teacher “ma’am” against her wishes. In response, they say the teacher made him write the word repeatedly on a sheet of paper

Though Tamarion will moving to a different classroom, Bryant is warning other parents of this sort of behavior. “If it happened to my son, I’m pretty sure if not a week, a day, a month, a year, it will occur to somebody else’s child,” he said.

And as for Tamarion’s punishment, it was returned to the teacher, signed as promised — but with a second sheet of paper attached, the family said: Tamarion, writing the definition of the word “ma’am.”

A Texas man is behind bars on suspicion of shooting at female drivers repeatedly over the past several months in Katy, a town west of Houston, local media has reported.

“He rants and rambles about female motorists and how incompetent they are, and how their sole purpose in life is to give birth to male children,” a Harris County prosecutor said in court late Thursday, local news outlet KHOU 11 reported.

Three dead, including suspect, in shooting at Madden tournament in Florida