FLINT—Redacted evidence. Millions of documents ignored. Statutes of limitations bearing down on them.

“I had never seen anything like it.” Worthy told the gathering. She said she told the prosecution team: “We’re going to have to start from the beginning.” 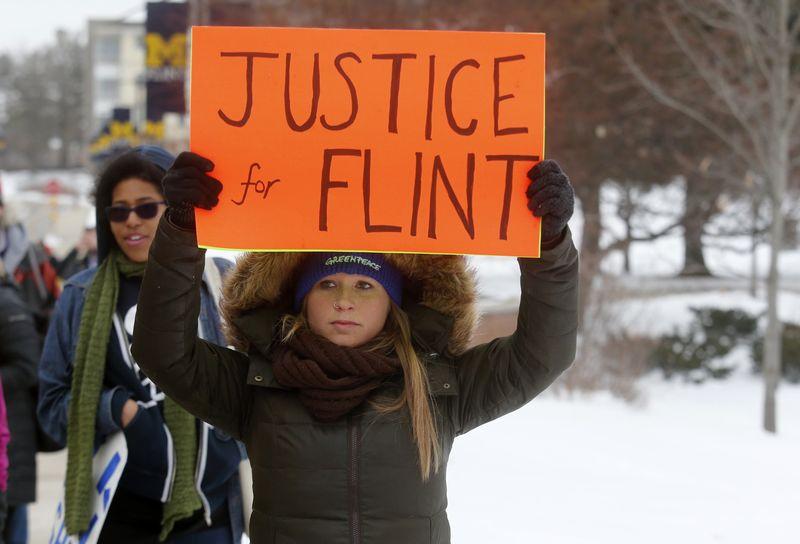 Which is how the veteran prosecutors, appointed by new Attorney General Dana Nessel, found themselves in a packed union hall Friday explaining to an exasperated crowd of Flint residents why they recently dropped criminal charges against eight remaining city and state officials charged in a crisis that resulted in high levels of lead entering the city’s drinking water.

The Attorney General’s team shared examples of redacted documents they came across as they examined documents collected by their predecessors.

They assured the crowd they would now aggressively follow evidence where it led, and would charge ‒ or recharge, as necessary ‒ any officials found criminally responsible for the water crisis.

But their assurances did little to convince many of the residents the state was capable of delivering long promised justice to the city.

Angry shouts and cries repeatedly filled the auditorium at United Auto Workers Local 659 as the prosecution contended that the case was mishandled by the previous investigation team under then-Attorney General Bill Schuette.

When the prosecutors said there may only be only nine months to file new charges before state statutes of limitations would make criminal charges out of reach, angry cries rang out.

I was part of the Flint water crisis investigation. Our team fought for justice

Attorney General Bill Schuette announces new charges against two high-ranking state health officials today in the fourth round of criminal charges in the Flint drinking water crisis on Wednesday June 14, 2017 during a press conference at Riverfront Banquet Center in downtown Flint. Michigan Health and Human Services Director Nick Lyon is charged with involuntary manslaughter and misconduct in office, both felonies. Chief Medical Executive Eden Wells is charged with obstruction of justice and lying to a police officer. Both are charged in connection with the Legionnaires’ disease outbreak in the Flint area that led to 12 deaths after the city’s water supply was switched to the Flint River in April 2014. (Photo: Ryan Garza, Detroit Free Press)

The Flint water crisis investigation has generated no little amount of attention and press coverage. To answer many of the questions surrounding the investigation, it’s always a good idea to start with the facts — and I know the facts, because I was a part of the investigation.

For starters, thousands of children were exposed to lead poisoning, an outbreak of Legionnaires’ disease resulted in the deaths of at least twelve people, and virtually everyone in the City of Flint was exposed to contaminated water. To this day, in the summer of 2019, many residents of Flint still only use bottled water to drink, to cook and to bathe. If that is not a cause for opening up an investigation, then what is? The investigation begun by then Attorney General Bill Schuette was the only ongoing investigation of what went wrong in Flint.

Why go outside the AG’s office?

Schuette had publicly stated he wanted to conduct the Flint investigation through the auspices of the Department of the Attorney General. But the department had already begun a vigorous defense of the State of Michigan against civil claims that had been brought because of the water contamination.

As a result, when Schuette asked for lawyers within the office to pursue the case, the department’s own Ethics Officer ruled that that was not possible, due to a conflict of interest. The lawyers and investigators already employed in the office had had the opportunity to review materials and information the State was using to defend itself against outside claims. Thus, they could not then retroactively cross over a conflict of interest wall and serve as prosecutors. As a result, Schuette had no choice but to go outside the department to conduct the investigation.

How the Flint water crisis set students back

by Marilynne R Wood, The Conversation

When the Flint water crisis took place in 2014 and 2015, one of my graduate nursing students decided to get involved.

Having already worked with me in the Greater Toledo area to screen children at risk for lead poisoning, my student helped conduct blood lead level screenings of the children exposed to the water. Test results later showed that the number of lead poisoned children in Flint had doubled after the crisis.

Since that time, some have worried that children in Flint are suffering academic setbacks as a result of being exposed to high levels of lead in Flint’s water supply.

State officials advised that as many as 9,000 children under the age of 6 in Flint be treated as having been exposed to high levels of lead after the city’s drinking water supply was switched in 2014 from water from Lake Huron to water from the Flint River.

Others, however, have pushed back, arguing that Flint’s water crisis is not the culprit behind any academic losses. Certainly lead was a problem for children in Flint long before the water problems.

But as a nursing professor and parent educator who specializesin treating children with elevated lead levels, I believe that just like in Detroit—where lead poisoned children have suffered academic setbacks after being exposed to lead, mostly from lead paint in their homes – similar academic setbacks are likely taking place in Flint.