The number of millionaires in the U.S. has plummeted from a record-high as the dual financial and health crises from the coronavirus pandemic slowly destroy the fortunes of the richest Americans.

At the end of 2019, there were an unprecedented 11 million American millionaires, evidence of the historic 11-year economic expansion and the tax cuts and ultra-low interest rates that accompanied it, according to a new study published by research firm Spectrem Group.

But the number of households in the U.S. above that threshold has dropped by at least 500,000 as of Friday. Wealthy Americans are more likely to feel the effects of a stock-market free-fall because they own more equity than the overall population. According to recent Federal Reserve data, the top 1 percent of households owned 53.5 percent of equities and mutual fund shares.

The losses affected the wealthy at all levels, from those who own more than $1 million to those who have more than $25 million, according to the report.

The wealthiest people in the world have seen especially dramatic losses: According to the Bloomberg Billionaire Index, the world’s 500 richest people have lost almost $1.3 trillion since the start of the year. That’s close to a 21.6 percent decline in their collective net worth.

Of course, ordinary Americans are likely to experience a more severe fallout from the virus outbreak and will be among the people hit the hardest by an economic slowdown that experts warn could rival the 2008 financial crisis.

HOW TO FILE FOR UNEMPLOYMENT AS CORONAVIRUS JOB LOSSES MOUNT

Last week alone, Goldman Sachs estimated that a record 2.25 million Americans lost their jobs as COVID-19, the disease caused by the novel coronavirus, forces businesses across the country to shut down and requires individuals to stay home to mitigate the spread.

The level Goldman estimates for the week through March 21 would blow past the previous record of 695,000 set in 1982.

Jobless claims in the U.S. are already climbing — last Thursday, the Labor Department said the number of Americans filing applications for jobless benefits jumped to 281,000 for the week ending March 14, the highest level since June 2017 — but are expected to skyrocket in coming weeks as American life comes to a grinding halt.

Dozens gathered in front of Metro Hall in downtown Louisville to rally in support of the anti-abortion movement on the anniversary of Roe v. Wade Louisville Courier Journal

LOUISVILLE, Ky. — In the midst of the coronavirus pandemic, Kentucky Attorney General Daniel Cameron has waded into the debate over abortion, demanding that Gov. Andy Beshear’s administration temporarily ban pregnancy terminations as part of his order to suspend elective surgeries.

In a statement Friday, Cameron, an anti-abortion Republican, called on the administration to find that abortions violate Beshear’s order to suspend most elective medical procedures in order to save hospital resources.

“Abortion providers should join the thousands of other medical professionals across the state in ceasing elective procedures, unless the life of the mother is at risk, to protect the health of their patients and slow the spread of the coronavirus,” Cameron’s statement said.

Beshear’s executive order Monday orders an end to procedures not considered essential, but doesn’t specify what they are. Rather it leaves that to the judgment of health care professionals.

[This story is being provided for free to our readers during the coronavirus outbreak. Consider supporting local journalism by subscribing to The Courier Journal at courier-journal.com/subscribe.]

Asked at his daily news conference on Thursday whether abortion is essential, Beshear deferred.

“I leave it to our health professionals to determine what falls into elective and the essential,” he said.

A Beshear spokeswoman did not immediately respond to a request for comment Friday about Cameron’s demand.

In Kentucky, abortion clinics are licensed and regulated by the Cabinet for Health and Family Services.

Kentucky has only one licensed abortion clinic, EMW Women’s Surgical Center in Louisville. Planned Parenthood of Indiana Kentucky is seeking a license to also provide abortions in Louisville and has been granted limited authority to offer the procedure while it is being inspected for licensure.

The American Civil Liberties Union of Kentucky and Planned Parenthood of Indiana and Kentucky blasted Cameron in an emailed statement.

Hospitals on the front lines of the pandemic are engaged in a heated private debate over a calculation few have encountered in their lifetimes — how to weigh the “save at all costs” approach to resuscitating a dying patient against the real danger of exposing doctors and nurses to the contagion of coronavirus.

The conversations are driven by the realization that the risk to staff amid dwindling stores of protective equipment — such as masks, gowns and gloves — may be too great to justify the conventional response when a patient “codes,” and their heart or breathing stops.

Northwestern Memorial Hospital in Chicago has been discussing a do-not-resuscitate policy for infected patients, regardless of the wishes of the patient or their family members — a wrenching decision to prioritize the lives of the many over the one.

Richard Wunderink, one of Northwestern’s intensive-care medical directors, said hospital administrators would have to ask Illinois Gov. J.B. Pritzker for help in clarifying state law and whether it permits the policy shift.

“It’s a major concern for everyone,” he said. “This is something about which we have had lots of communication with families, and I think they are very aware of the grave circumstances.”

Officials at George Washington University Hospital in the District say they have had similar conversations, but for now will continue to resuscitate covid-19 patients using modified procedures, such as putting plastic sheeting over the patient to create a barrier. The University of Washington Medical Center in Seattle, one of the country’s major hot spots for infections, is dealing with the problem by severely limiting the number of responders to a contagious patient in cardiac or respiratory arrest.

Several large hospital systems — Atrium Health in the Carolinas, Geisinger in Pennsylvania and regional Kaiser Permanente networks — are looking at guidelines that would allow doctors to override the wishes of the coronavirus patient or family members on a case-by-case basis due to the risk to doctors and nurses, or a shortage of protective equipment, say ethicists and doctors involved in those conversations. But they would stop short of imposing a do-not-resuscitate order on every coronavirus patient. The companies declined to comment.

In only a matter of days, the economic collapse brought on by the coronavirus pandemic

has completely changed everything about our lives. In many ways, the growing crisis has laid bare the already existing contradictions which threatened to pull this society into open class conflict; from low paying jobs, increasing austerity, brutal police, the quickening of ecological collapse, an out of control housing crisis, and a growing carceral State. 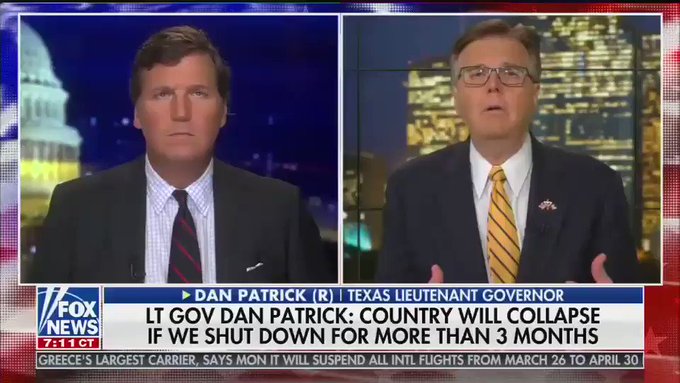 36.5K people are talking about this

But with millions of people now wondering how they are going to make ends meet and pay rent, let alone survive the current epidemic, a new wave of struggles is breaking out across the social terrain. Prisoners and detention center detainees are launching hunger strikes as those on the outside demand that they be released, tenants are currently pushing for a rent strike starting on April 1st, the houseless are taking over vacant homes in Los Angeles, and workers have launched a series of wildcat strikers, sick-outs, and job actions in response to being forced onto the front lines of the pandemic like lambs to the slaughter.

Capitalism has always involved a “how many deaths are acceptable” calculus, and the answer has almost always been “the number of deaths at which people start rising up” minus one

2,280 people are talking about this

But as tensions flare and economists predict upwards of 30% unemployment in the coming months, there is also a growing push from within the elites to herd us all “back to work.” Trump has stated that he wants things back to ‘normal’ by Easter, a move which threatens to undo anything that has been achieved by social distancing and attempts at quarantine. More and more, the refrain from within the Trump camp, Fox News, and sections of the MAGA aligned Right as Republicans and Democrats near a deal for a corporate bailout, is that mass death is acceptable as long as the economy, (read, Trump’s bid at re-election), is salvaged.