Mail volume (and the accompanying revenue) could be down 50% this year, according to some estimates. The already teetering Postal Service could run out of money soon. That fear, combined with widespread concerns about letter carriers exposed to the virus, has put some lawmakers into a fatalistic mindset.

Rep. Gerry Connolly (D-Va.) put it bluntly: “We need to start thinking in those apocalyptic terms,” he said in an interview with Yahoo Finance Tuesday, “because we are about to face the apocalypse.”

The current crisis is “in many ways the final straw,” said Connolly, who is chairman of the House subcommittee that oversees the Postal Service. He believes that without some sort of intervention it will run out of cash in June.

Two weeks ago, ProPublica published a report saying that some postal employees were continuing to work after displaying COVID-19 symptoms, and seemingly healthy employees had insufficient protection against the virus.

Postmaster General Megan J. Brennan responded to some of the concerns on Wednesday during a Board of Governors session. “We are promoting healthy behaviors and protocols and encouraging any employee who feels sick to stay home,” she said. “In order to further encourage this behavior, we have updated our leave policies to allow liberal use of leave.”

Brennan also acknowledged some supply problems in the recent past saying, “we are continuing to work to overcome gaps in the supply chain to insure that our employees have access to hand sanitizer masks and gloves.”

Our postal workers already had one of the most important jobs in America.

Now they are putting themselves at risk to deliver everything our country needs.

I am asking the Postal Service to do much, much more to protect their safety and wellbeing right now. 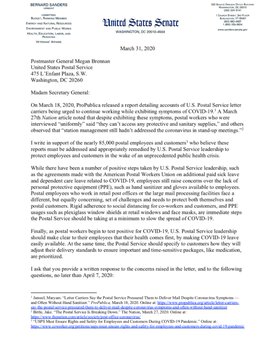 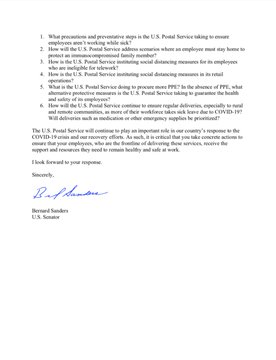 A spokesperson for Booker told Yahoo Finance that his office has not received an answer but remains hopeful that we can work with the service “to implement stronger workplace protections for the safety and well-being of USPS employees as well as the millions of Americans who depend on their services.”

“The health and well-being of our employees is always our first thought in facing the COVID challenge,” the Postmaster General said on Wednesday. She also underlined that the CDC, WHO, and Surgeon General all “have all said that there is very low risk that this virus is spread through mail which should be a comfort to us all and to the public.”

Connolly agreed the risk of transmission via mail is low, but “if we made sure that all of our postal workers had access to hand sanitizers and gloves, we could come close to eliminating the risk.” A lack of guidance or protection for letter carriers “is very imprudent and puts people at some risk. Not a high risk, but a risk.”

The USPS has made one change: it no longer requires customer signatures. Letter carriers will instead – from a distance – request the customer’s information and enter it themselves.

‘They’re going to run out of cash in June’

The USPS operates as a self-supporting, independent federal agency – sort of halfway between an independent business and a government agency. It likes to tout that the service “receives no tax dollars,” instead paying for itself from the sale of postage, products and services.

During the phase 3 negotiations, Connolly and other House Democrats proposed changing that by eliminating outstanding debt and allotting $25 billion to further shore up USPS finances. They even wrote a letter to Sen. Mitch McConnell “to seek your urgent help.”

They also want to repeal a mandate imposed in the Postal Act of 2006, which they say denies the USPS a chance to be profitable, arguing that the rule requires the Postal Service to pre-fund retirement health benefits for its employees. It’s a financial burden that puts “the Postal Service in a straight jacket,” according to Connolly, and has been the focus of repeal attempts for years.

The National Association of Letter Carriers, a union representing postal employees, responded: “That is woefully inadequate.”

Connolly says that some of the conditions on the $10 billion (including more of a Treasury role in management) was “an unacceptable condition for everybody,” and he still sees the USPS going out of business within months if nothing is done.

Then USPS and ‘Phase 4’ negotiations

The Postal Service has been gradually shrinking for years as outfits like UPS and Fedex Express (not to mention email) encroach further on its business. Total mail volume has shrunk from 170.9 billion pieces of mail in 2010 to 146.4 billion in 2018.

Yet advocates note the USPS still serves important functions, from delivering prescription drugs to Social Security checks. It also remains the only option in some rural areas where; as the National Association of Letter Carriers points out, “private companies rely on the USPS for last-mile delivery.”

The USPS is also how millions of Americans who don’t have direct deposit information on file with the IRS will receive their $1,200 stimulus checks.

And then there’s perhaps the most politically fraught factor: “We’re also counting on the Postal Service to save our election process,” Connolly said amid questions about whether November’s elections will need to be done through the mail given concerns about voting in person. “What if there’s no Postal Service?” he said. ”Well, that could affect the outcome of an election.”

Trump has not discussed the Postal Service at length since the coronavirus crisis began. On March 23 he thanked “the hardworking men and women of Federal Express, UPS, the United States Postal Service, and the truckers who are maintaining our supply chains and supply lines.”

But Connolly claims that, behind the scenes, Trump himself was instrumental in killing aid to the USPS. He said Trump personally axed direct aid to the service. House Speaker Nancy Pelosi “said this came directly from Trump and she has reiterated that more than once,” Connolly said.

The White House did not offer comment on Connolly’s claim.

On Tuesday, during an appearance on MSNBC, Pelosi reiterated that Postal Service funding is crucial in a phase 4 deal largely to keep voting by mail as a viable option.

“I’m going to continue like a dog and a bone on this issue,” said Connolly, “because we won’t appreciate the criticality of it until the worst happens, and I’m trying to prevent the worst from happening.”