That April, the US Congress passed FOSTA/SESTA, twin bills that stripped sex workers of the ability to advertise or seek support online by making websites criminally liable for their postings. This impoverished the community, forcing some workers back to pimps or onto streets, where they faced arrest or assault.”
In response, sex workers—both young women and longtime activists—got together and mobilized to fight for full decriminalization of their work.

The complete decriminalization of the sex trade is an approach that has gained traction in recent years, with even groups such as Amnesty International calling for “the decriminalization of all aspects of adult consensual sex work due to the foreseeable barriers that criminalization creates to the realization of the human rights of sex workers.” But as with every successful movement, there has been a backlash, led by longstanding feminist organizations that continue to assert that sex work is, to use the words of Gloria Steinem, a form of “body invasion.” Full decriminalization, no matter the studies that have been conducted, the first-hand experiences of many sex workers or people otherwise targeted with anti-prostitution laws, and the endorsements from human rights organizations, is still seen as a radical idea, and more to the point, one that some feminists believe is antithetical to the needs of women.

On Monday, some of those divisions were on display in New York City, when a coalition of organizations pulled together by the New York chapter of the National Organization for Women held a press conference and rally to push back against the planned legislation in New York (several speakers, tellingly, called it the “Pimp Protection Act”) and to call instead for what is commonly described as the Nordic, or End Demand, model—the decriminalization of sex workers, while continuing to keep the purchase of sex a crime.

“The sex trade could be coming to a neighborhood near you,” NOW-NY president Sonia Ossorio warned, as reported by Broadly. “If the wholesale legalization of the sex trade comes to New York, what would that look like? Will we have prostitution zones? Will we have an upscale one in the new Hudson Yards, or in the tried-and-tested Times Square, like when pimps hustled for customers and shot around the city looking for the next down-on-her-luck woman to lure into prostitution?”

New York Representative Carolyn Maloney echoed Ossorio: “This idea does not help or lift up or empower or protect women in any way, shape, or form. I support efforts to decriminalize prostitution, but I do not support any idea, bill, or proposal that would let pimps, johns, and the exploiters off the hook.”

Yet many sex workers and advocates argue that the Nordic model makes their work more dangerous by pushing them further underground, and that criminalizing the purchase of sex has ripple effects that make their work more ripe for violence and exploitation. As Decrim NY wrote in a statement after Monday’s rally: “The Nordic Model is criminalization, and it puts people who trade sex at increased risk of violence, economic instability, and labor exploitation.” The coalition also noted that Ramos’s and Salazar’s planned legislation would “explicitly build in protections for people trading sex, especially trafficking survivors, so they have recourse against violence and exploitation.”

Two sex workers who interrupted Monday’s press conference—with one shouting, “Listen to sex workers. Nothing about us without us”—told the Daily Beast they were there to protest the idea that sex work can never be consensual as well as the idea that all sex workers are victims.

As one of them, who uses the name SXNoir, told the Daily Beast, “It’s important for us to be here because we are consensual sex workers, and the idea that sex work can never be consensual is just wrong.”

“Just with the language that’s been used here … it’s basically painting us as victims, which is not our story,” the second woman, who identified herself as Adrienne, said. “People have that story and I think that’s valid. But that’s not my story and that’s not a lot of people’s stories, and those deserve to be heard as well.”

NOW New York President Sonia Ossorio told The Daily Beast that her organization also wants to stop the arrests of sex workers, but contends that many of those advocating for decriminalization of buyers “haven’t thought it through.” She added that the primary danger to sex workers is not threat of arrest, but the job itself.

NOW-NYC✔@NOW_NYC · Mar 8, 2019Join us on the steps of City Hall on Monday, March 11th at 10am to protest the decriminalization of pimping and buying sex. We need a middle ground that protects people engaging in the sex trade without legalizing pimping. 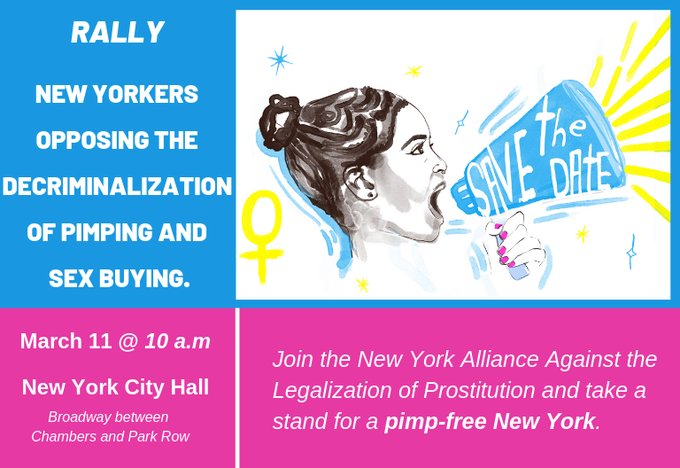 @FrancoiseGirardThis is terrible @NOW_NYC. These policies hurt sex workers and lead to their arrest and further harassment by the police. Time to decriminalize all sex work and ensure sex workers enjoy labor protections.
7811:21 AM – Mar 9, 2019Twitter Ads info and privacy

“What makes their job dangerous is when the door locks behind them, and they’re with a sex buyer, a stranger that they don’t know, who could potentially physically harm them,” she said. “The job is inherently dangerous because of the job that it is.”

“Decrim NY works to end violence, not just for sex workers but for survivors of exploitation,” the group said in a statement. “Decriminalization does not make rape, trafficking, assault or any form of violence or exploitation legal.”

The lone legislator to speak at Monday’s rally, U.S. Rep. Carolyn Maloney (D-NY), said she also wants to decriminalize women in the sex trade, but argued that her colleagues’ bill would “let the pimps, the johns, and the exploiters off the hook.”

Rally participants also included members of OBJECT, a U.K.-based organization that advocates against prostitution, pornography, and “transgenderism,” as first noted by writer Melissa Gira Grant. A statement on the group’s website says it is “concerned by the dangerous impact ‘transgender’ ideology and practice has on women and children,” and that transgender acceptance is “in direct opposition to the views of feminists.”

“I’m not surprised the trans community was targeted here,” Mateo Guerrero-Tabares, a trans advocate and Decrim NY Steering Committee member, said in a statement. “We fight to decriminalize the sex trades because it is a matter of survival for our community.”

Both NOW and Maloney disavowed OBJECT’s message on Twitter. NOW spokeswoman Jean Bucaria told The Daily Beast she did not know how the group came to participate, though they were prominently featured in the crowd of supporters behind the podium.

The Daily Beast✔@thedailybeastWATCH: Sex workers crashed a rally against the decriminalization of sex work in New York state—exposing fissures in modern feminism http://trib.al/DA3cSSD 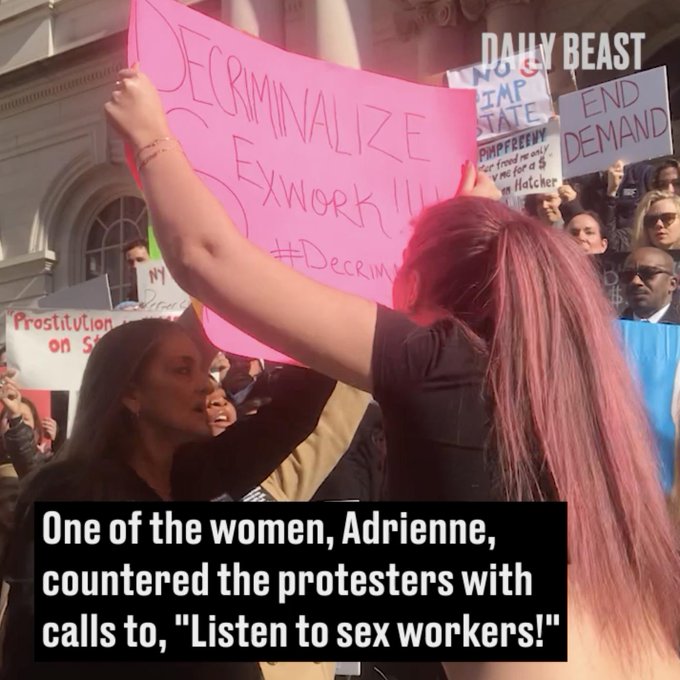