These Black conservatives ARE NOT Republicans.  For the most part, they’re non partisan and many of this particular crowd actually think legislation, bills, amendments, school board members, city ordinances etc:  don’t matter.  *Why?* Well, to my understand it’s because they don’t run on any legislation that specifically and only helps bl*ck people.

Since 2011, we’ve never heard or read them articulating what they want, but they do say they want to “replace the system of injustice with a system of justice”

We call them conservatives because the social values they express.
The call gay/queer/trans folks “sexually confused”.  They’re pro capitalism.  They’re anti choice.  Of course they think the feminism is a CIA conspiracy to “break up the black family”.  They firmly believe in nature or spiritually assigned binary gender roles.

The second tier has it’s nuances and subtle difference from Jason Black to Tariq Nasheed to Boyce Watkins and of course the most interesting and staunchly conservative of them, Gus T Renegade.  Which is obviously not his real name which one can assume creates an alluring mystery to a true believing follower of his.  That moniker actually comes from the Klan propaganda film “Birth Of A Nation”. in that film, character accused of raping a white woman was named “Gus The Renegade Negro”. So… Very Clever.

These figure heads and their loyal followers are sorely displeased that Bill Cosby went to prison for being a rapist. As they are conservatives, preferred narrative trumps facts.  Arbitrarily assigned correlation trumps a traceable series of chronologically separable events and stories.

Testimony from other comedians such as what is covered here from Uproxx doesn’t matter and they would just call that Racism White Supremacy.

Patton Oswalt was on the You Made It Weird podcast with Pete Holmes and actually made it weird for a minute. That’s because the topic of Bill Cosby came up during the chat and Oswalt had some very strong, but noteworthy opinions on the situation.

The comedian hasn’t shied away from letting his feelings known about the Cosby sexual assault allegations, but the detail he goes into during the podcast really drive the message home: This probably is going to get worse.

They don’t care that he paid over 3 million to make the case go away in 2006 as documented in outlets such as The Guardian.

“”””Bill Cosby paid $3.4m to buy the silence of a young woman he had previously drugged and then sexually assaulted, a prosecutor alleged on Monday as the comedian’s retrial got under way in Pennsylvania in the first major courtroom drama of the #MeToo era.

Kevin Steele, the district attorney for Cosby’s home county of Montgomery, revealed a secret that has remained hidden for the past 12 years – the amount of money that the TV star formerly known as “America’s Dad” was prepared to pay to keep his detractor quiet. The $3.4m was allegedly paid in 2006 to Andrea Constand, a Canadian massage therapist, to bring to a close a civil suit she had brought against him claiming he had persuaded her to take relaxant drugs before molesting her while she was unconscious.””””

They don’t care that #metoo is actually from 2007 but gained little to no traction.
Or that it wasn’t until a decade later in 2017 when it did pick up as covered in outlets like Ebony.com and DemocracyNow.Org.

They don’t care that it was shaky video from an amateur filmography with a smart device uploaded in 2013 that actually bought awareness to Cosby being a rapist.
That there was no #metoo conversation, let alone a movement.
They don’t care that fellow comedian, Hannibal Buress of whom actually has a joke of which rhetorically opposes feminism, is the one that took to the stage that evening.
They also don’t care why.

That younger performers since the 80’s had trouble with him trying to control them and make them not use dirty, evil curse words going back to Eddie Murphy.  That before Buress started saying that on stage, Cosby was a guest with fellow comedian, John Stewart and was telling him that the only reason people laughed was because of his dirty language.

One is probably not surprised that these folks are also conspiracy minded and when you mix that with being highly conservative AND against white supremacy, it gets a little weird.

Remember the story of the adult white  woman of whom accused the little 9 year old black baby of groping/assaulting her? (Link Here)

They call THAT part of #MeToo.

If you should dare make your way down this rabbit hole, you’ll find ideas expressed such as….. 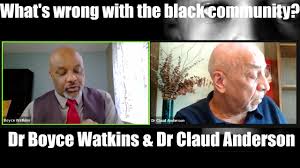 This was actually articulated for a full segment by Claud Anderson on Boyce Watkins’ youtube program.

You’ll find Jason Black saying white people took down Bill Cosby, not because of who he is himself, but because they hate his Cliff Huxtable character from some old sitcom.

These black conservatives are big tent echo chamber with Boyce Watkins and Jason Black pushing the classism more so than others.  Tariq Nasheed brings the “street” energy and little bit of California liberalism with him. Cree plays the fauxminist among them.  Gus T Renegade is the most cultish and very staunch.  Neely Fuller Jr has a book out and does audio clips with the pausing and pacing of a comedian.  Frances Welsing, even in death is still one of the most referenced for her popular pseudoscience and creatively colorful ideas about sexuality.  They actually call The Grancestor.

We’ll leave you with an example of an idea she actually pushed.

Her idea is that white people eat chocolate bars to simulate fellating and even consuming a black mans penis.
She furthers it with the idea that there are chocolate bars with nuts in them to represent the testicles.
She goes even further and points to Valentines Day and postulates that white people to celebrate romance, they give each other imaginary black penises and testicles because of their obsession with black penises.

That’s right. Fans of her and this whole ideological crowd are out there.

Peace
Please be as safe as possible wherever you are.